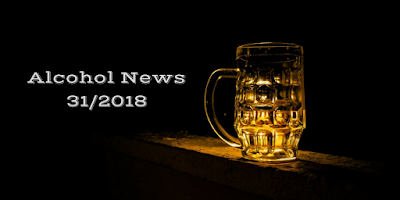 CNN - Alcohol in breast milk may lead to lower cognition in kids, study finds
Children's exposure to alcohol through breast milk may cause a comparable drop in their cognitive abilities, according to a study published Monday in the journal Pediatrics.
Read more
New Zealand Herald (New Zealand) - Alcohol brands should be banned from sponsoring sports, researchers say
Researchers say alcohol brands should be banned from sponsoring sports due to the damaging impacts it has on children.
Read more
NEWS.com.au (Australia) - New ID scanner could make it a lot harder to buy alcohol
A PROPOSAL by the Western Australian government could make it a lot harder for some Aussies to buy alcohol with the introduction of an ID scanner in bottle shops.
Read more
Economic Times - Say no to alcohol, exercise regularly to reduce risk of cancer
A healthy diet and physical activities with no alcohol consumption can help in reducing overall cancer risk besides also lowering breast, prostate and colorectal cancer risks.
Read more
Newshub (New Zealand) - Kiwi kids exposed to alcohol ads over four times a day – study
The study by University of Otago and University of Auckland found children were exposed to ads in the home, licensed outlets and sports venues.
Read more
Medical News Bulletin - Can your alcohol consumption put you at risk for a heart attack?
A recent study in PLOS Medicine explored the controversial issue of the relationship between alcohol and the incidence rate of heart attacks.
Read more
Deutsche Welle (Germany) - Alcohol and the unforgiving liver
Small amounts of alcoholic beverages now and then can be broken down by the liver. However, long-term, too much alcohol damages not only the liver, but also the brain.
Read more
Novinite.com (Bulgaria) - Bulgaria in the Top Six in the World When it Comes to Alcohol Consumption
"Capital" reports that, according to the International Organization of Wine and Spirits Record (IWSR), Bulgaria is among the top six in the world for consumption of spirits per capita, as the statistics also include domestic production.
Read more
TTG - Travel backs ‘One Too Many’ responsible alcohol campaign
Airports, airlines and tour operators have teamed up to call with one voice for a clampdown on excessive pre-flight drinking.
Read more
BBC News (UK) - Every university 'needs' Alcoholics Anonymous meetings
Alcoholics Anonymous (AA) meetings should take place in universities across the UK, student leaders have said.
Read more
DesMoinesRegister.com (USA) - Drunk drivers: Iowa is going to start asking where you had your last drink
Officials with the Iowa agency that approves liquor licenses are pairing up with a national organization to track where intoxicated drivers were last served or provided alcoholic beverages.
Read more
VietNamNet Bridge (Vietnam) - Alcohol-related harm equivalent to 1.3-3.3% of GDP
The cost of the harm done to society by alcohol consumption in Vietnam is valued at 1.3-3.3% of the nation’s gross domestic product (GDP), the World Health Organization (WHO) reported at a recent group meeting of the Ministry of Health in Hanoi.
Read more
Scoop.co.nz (New Zealand) - Time for Government action on reducing alcohol-related harm
University of Otago experts in addiction medicine and the health effects of alcohol are questioning what the barriers are to Government action on reducing alcohol-related harm and calling for change.
Read more
AllAfrica.com - Botswana: Alcohol Intake Declines
The Alcohol Levy has resulted in a decrease in alcohol consumption in Botswana to around seven litres of pure alcohol per capita in 2011/12 from eight litres in 2008.
Read more
The Sun - ‘It’s time for a ban on airport drinking’ – warns booze and violence expert
University professor Simon C Moore has argued that the comfort of all passengers outweighs the desires of a minority who want to “start their holiday early”.
Read more
Posted by alcoholweekly at 16:44

Stress: Is it time to expose the alcohol con?

Alcohol can cause cancer, so why don't most Canadians know that?

Don't be the present he's waiting for

Every moment matters in your pregnancy

Every moment matters in your pregnancy from FAREAustralia on Vimeo.

Tomorrow will be great, let the future hold you back