Over two thirds (68%) of Brits have no idea how many calories are in the alcohol they drink, according to new research from personal finance comparison site finder.com.

This includes an estimated 2.7 million Brits who think there are less than 40 calories in a pint, despite the actual figure often being more than 200. The survey found that millennials were four-times more likely to think this than baby boomers, and they also underestimated by the largest amount across all alcohol types.

In contrast, baby boomers tended to think there are more calories in alcohol than there really are. For example, their guess for the amount of calories in a shot of vodka was, on average, 112 - more than double the actual amount of 54.

Men are 20 per cent more likely to be clueless about the calories they’re drinking, even though they consume double the amount women do every week.

For those watching their waistlines, two surprisingly calorific drinks to avoid are sambuca, which has around 45% more calories than other common spirits, such as gin, and alcopops, which are the most calorific choice at 155 calories per unit of alcohol.

Your choice of mixer can also make a big difference. Opting for standard tonic rather than diet with your double measure of gin adds 53 calories overall and means that you’re actually taking in a similar amount of calories per unit of alcohol to beer (89 vs 85).

Jon Ostler, UK CEO at finder.com, said: “Healthy living and self-awareness have become more common, so it’s surprising to see the number of people who still lack basic knowledge about alcohol. We don’t need to become a nation of calorie counters or give up drinking altogether, but it’s important to understand that certain alcoholic drinks are as fattening as fast food. The average person drinks more calories per week than you would get in three Big Macs, but they don’t necessarily realise it’’. 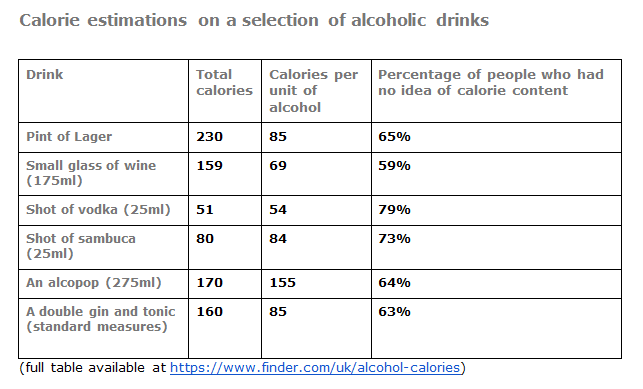 Would you drive on this?

How does alcohol cause hangovers?

The Shocking Effects of Alcohol on Sleep

Did you know drinking too much can lead to cancer?

No Alcohol Day in Thailand

The Truth About Alcohol and Erectile Dysfunction

It Was A Rough Road Through The Drugs And Alcohol

WE ALL NEED TO SAY NO